Well, spring is finally popping out all over in my classroom, even though it really doesn’t feel like it too much outside!  We spent the week learning about the life cycle of the frog, and then kicked off our unit on community helpers by learning about fire fighters and having a big school wide earthquake drill on Thursday.  Ah, Kindergartners just don’t understand very much about these things, do they?  Even after we went though the whole “duck and cover” routine and accompanying explanation, and then exited the building, there were still questions such as “When will the earthquake start?” floating around the grassy area where we were all assembled for the drill.
Meanwhile, with illness at home, even though I have finished up the rest of the Butterfly Addition and Subtraction worksheets and also the Jellybean Addition and Subtraction Worksheets, they did not get posted in time for this blog entry. But look for them on the website in the coming week! 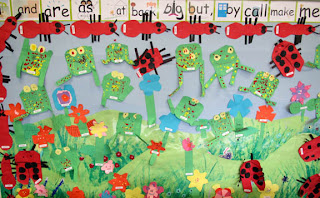 1.  A Frog and Tadpole Art Project

We started our unit on the life cycle of the frog with a tadpole project on Monday and a frog project on Tuesday.  I am sharing the patterns for these projects with you today, just for fun.   The frog in particular is one of the simplest art projects that we make, and definitely one that the children can do on their own.  As you can probably tell by the picture, the spots on the frog are made with Q-tips and paint.  When the frogs were completed, I took the leprechauns down from the bulletin board that we made and replaced them with frogs, though not the tadpoles, since I really didn’t have a good spot for them.  I left the flowers and insects up that we made last week, since they go well together.

2.  Some Great Books to Read 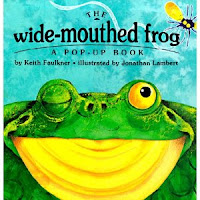 We read a couple of books on the life cycle of the frog, and also a wonderful pop up book by Keith Faulkner called The Wide Mouthed Frog.   The children always love this story, and the fact that it has pop up pictures is always a plus!

Another nonfiction book that I always rely on is The Tale of a Tadpole.  This weekend, I am going to set up my classroom aquarium and go to the local pet shop to buy a couple of bullfrog tadpoles.  We’ll watch them develop over the next couple of months. The kids are always so funny; last year, on the first day I introduced them, one child asked, will they turn into frogs TODAY??  I just hope that we get one that actually turns into a frog before the school year is over!  Last year we were still waiting for that to happen on the last day of school.

3.  Froggy Songs
Later this year, we’ll be putting on my newest play, which is actually the same story as the one in the book above:  The Wide Mouthed Frog!  And it turns out that the overture for this play is a song that teaches the kids about the life cycle of the frog.  I taught it to the kids on Monday.  (It’s funny how it all works out, isn’t it?  You would think that somebody actually PLANNED it that way!)  So on Monday morning, they were all swimming around, pretending to be tadpoles with wiggly tails, and then growing legs, losing their tails, and becoming frogs with great big mouths that hopped all over the place.  It was too cute!  The second and third songs in the play are also frogs song, too:  “Brr-ump Went the Little Green Frog” and “Hopping Along”.  So we are going to learn those songs now, and then we’ll already have them down when it is time to get ready to do our play in May.
Of course, we also had to sing the “Have” song from Sing and Spell Vol. 2,  because it says, “Have you got a froggy singing in a pond?  H-A-V-E, have!  H-A-V-E, have!”  Luckily, we already know that one. 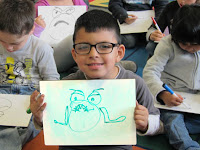 There never seems to be enough hours in the day to get everything done that I would like to do with the class, but on Monday I guess God was smiling on us, because we actually had enough time to do a little bit of guided drawing!  Of course, the only reason why I was able to fit it all in was because they didn’t get to go outside for recess due to the rain.  Now THAT was a big bummer, but let’s not go there!
I decided to have them draw on white boards this time, since that way I they would be able to change the expression on the frog’s face without starting over completely.  That way it would be much easier to just change the eyes, etc., rather than begin again with an entirely new drawing.  I was also trying to teach them to think about including some emotions in their little story books they have been writing other than just “happy” and “sad.”

I thought that a good way to do this would be to show them how to draw a face that was angry, tired, sad, or afraid, etc.- even if it WAS a frog’s face!  Well, they LOVED it- no surprise!  So now I am hoping to get a few more creative emotions included in their stories this week, rather than just “happy” and “sad” over and over again.  We’ll see how it goes.  In any case, I am including the directions for the guided drawing for the frog for you this week.  It’s really a very simple one. 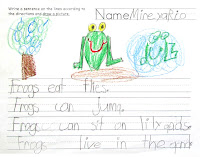 I am super proud of my children and how well they are writing these days!  I love that they are off and running with inventive spelling, and that their stories are (usually) fun and creative.  We have been making some graphic organizers to help us brainstorm and organize our thoughts about the different topics that we are learning about, and I think that this does help the children get include more information in their writing, particularly in regards to non-fiction topics.  I also really love the way the pictures that they learn to draw in our guided drawing lessons show up in their writing. 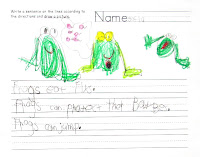 I think that this really helps free some of them up to better illustrate their little books and stories with confidence.  So enjoy the pictures I am posting today of their recent writing samples!