How to Combine Zoo-Phonics with HeidiSongs 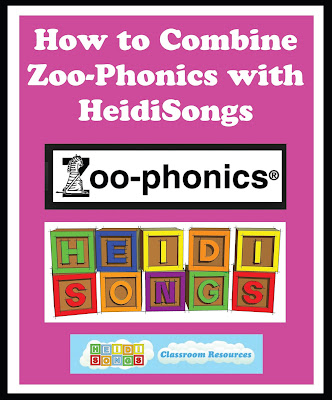 On the first day of school, I introduce the Zoo-Phonics characters and movements from A-Z, usually as early in the day as I can.  Then, later in the day, (usually after recess), I also introduce my Jumpin’ Numbers and Shapes cards, along with a few of the songs (usually Zero, One, Two, and Three.)  The next day, I do Zoo-Phonics again early in the day from A-Z (although my cards are always mixed up and not in any particular order.)

Later again, usually after recess, I review the Jumpin’ Numbers and Shapes cards and sing the songs we learned the day before.  Then I introduce another few songs- maybe the songs for Four, Five, and Six.  Each day, I follow this routine, along with the other things you would normally do on the first few days of school, like read stories about starting school, play games with names, learn how to make patterns, do some graphs, etc.

Every day, then, I add on a couple of new number songs and review the previous songs.  How many songs I do each day really depends on how long my class can pay attention and how much they are enjoying it.  Often, I have students who are either repeating the year or who had siblings in my class.  These kids often know many of the songs, and will beg for their favorite ones, so that makes me go a little faster sometimes.  I start adding in the color word songs right after Zoo-Phonics early in the morning on the second or third day of school, along with one letter song per day from my Singable Songs for Letters and Sounds CD!  Then we’ll do ZP and then sing a few color word songs, learning just two or three and then adding them in as the children can handle it.  I try to introduce as many as I can without exhausting them and making them tired of the songs. I try not to “cram it down their throats,” but I want to introduce as many color words as I can while still making it fun for them.

Typically first thing in the morning, I will take roll, salute the flag, and do the calendar, and then stand up for ZP and singing.  After that, I will read a story and explain some type of art or hands-on activity that we will all do together.  Then, we’ll we’ll do the first two rotations of our centers and then go to recess after that.

Once we come in from recess, we do the remaining two rotations of our centers, and by then the whole class will have met with me in small groups. We go to lunch, and then we’ll read a story to calm down and maybe do a graph.  Then we’ll do our numbers and shapes cards and songs, and then have some inside playtime until it is time to go home.

Our students only stay half day during the first four weeks of school; after that, they stay until 1:20 (school starts at 8:15.)  At the beginning of the third trimester, the kids begin staying until 2:15 and then go home after that.  Thursdays are Compact Days and the kids go home at 1:15 all year, except during the first four weeks.  We can sing a little more in the afternoons once we start staying later.  This extra time allowed me to finish teaching all of the alphabet songs by the fifth week of school.  We usually did the alphabet songs in “chunks;”  for example, we worked on A-F for a while, then G-L for a while, and then L-Q for a while, and so on. As far as the sight words are concerned, I usually start with the word, “the” after about two and a half or three weeks of school, and then introduce “see” on the same day, or a couple of days after that.  I use the sight word songs from Sing and Spell the Sight Words for this and it goes really fast.

We continue doing Zoo Phonics (ZP) every day for the first three weeks (at least!) of school faithfully.  After about three weeks, I start pulling kids individually during their playtime to see who knows ZP yet.  If the majority of the kids know all of the sounds and signals, I start doing ZP, but with modified “transitional” cards that I made with the ZP font.  These have the ZP character on the front as always, but on the back, there is just a plain letter.  I drill the kids on ZP, but just show them the plain letter and ask them to do the sound and signal as always.  If they get it wrong or hesitate, I flip the card over to the ZP side for a quick look, and then flip it back to the plain letter side.  So when they are doing the sounds and signals, they are doing it while looking at the plain letter.  Though I may give them a quick review/look of the ZP side, they are looking at the plain letter while they “do it, hear it, see it, and say it” simultaneously.  As soon as they give me the correct sound, I say, “What’s that letter name?” and those that know it call out the name of the letter.  This helps teach the ones that don’t know the letter names.  I begin pulling the lower ones out during playtime to work with them individually on the ZP Transitional cards to try to teach them the letter names.

Last year, I kept the lowest of my low kids for after school tutoring and worked on this same routine again with them and also added in many of the alphabet activities that are on the handout for my Singable Songs presentation.  By the time about four or five weeks of school have passed, most of my students know most of the alphabet and the sounds.  Once they know them, we stop doing ZP except maybe once a week, or even just a couple of times a month for review, (although I do have them signal the sounds as we learn to sound out words.)  We pick up on the sight word songs, and learn about two or three songs per week.  Again, how fast I go depends on the attention span and attitude of my group.  If they are loving it and begging for more, I give it to them!  If not, then I just stick to about two new words per week.

We do activities with the words in small groups to help the learn them.  Check my Learning Centers Pinterest Board for lots of ideas for this!  We also write them while the music plays in large groups using a class set of magnadoodles or white boards.  Check my Sight Word Pinterest board for lots of Sight Word Activities. So basically, I don’t follow the ZP manual really at all!  I did follow it when I first started doing ZP, but since then I have trimmed it down a bit to make it more manageable as far as time is concerned.  Another thing that really helps is to show parents how it works at your first parent meeting, and have them learn it.  Then use the ZP font to make cards that the kids can take home.  Most parents are really “gung-ho” to help at the beginning of the school year, and are eager to have a way to help their kids.  When the parents work on ZP at home, it goes much faster than without.  I would say that about one fourth of our student population have parents that may not help their children at all, (either due to lack of language or because they don’t know how to help, etc.)  I usually help the children from these families in my room during after school tutoring or during playtime.  You have to make sure that they are practicing making the correct sounds when they do ZP, or they will likely learn that incorrect sound and this can be hard to correct.

I hope that this post has been useful to you!  If you liked it or found it helpful, please follow me via email by writing your email address into the box on the upper right, or follow me on Bloglovin or some other type of blog reader to follow my posts.  And don’t forget to follow me on Pinterest, Facebook, and Google+, too!