This week, I created some giant zoo animals out of butcher paper for my kids to paint!  So I am going to tell you a little bit about how I did that, and then let the pictures tell the rest of the story.

To create the animals, I just took the patterns from the Zoo Book that is on our website and basically multiplied the size times five!  So if the pattern called for a five inch square for the head of an animal, I cut out a 25 inch square, and then cut off the corners as usual!  As far as the patterns were concerned, such as for the head of the alligator, I had to just sort of sketch it out myself because I couldn’t possibly enlarge the pattern on the xerox machine to that size!  So I just “eyeballed it” and took my best guess, figuring that it needed to look a little childish anyway, and it worked out just fine!  When I was finished putting the animal together, I took another look at it, and if a body part appeared to be a bit too large, I trimmed it down a bit until it looked right.

Once I had all of the animals cut out, I taped the pieces together with scotch tape!  I was able to glue some parts, but I taped others, depending on what I thought would hold the best.  Also, I doubled the smaller pieces for strength and durability because I wanted to be able to hang these animals up on the classroom walls.  So I doubled the pieces for the legs, ears, and tails, etc.

My classroom has some VERY high ceilings, so it can be tough to try to cover all of it for Open House, so these giant animals come in very handy for covering large spaces in one shot.  But I also value them because they require that the children work together nicely to paint the animal.  Most of them require some persistence, too, because it can take a while to paint a large animal shape, and it can be a little tiresome for them when it is all one color!  So they have to really stick with it and work together to finish it.  That’s hard for some of them!

Overall, this was a really fun project for them, but it took me quite a while to cut out the animals and tape them together.  It took me about a half an hour per animal from start to finish just to cut them out and get each one ready.  The snakes took much less time, though, because they are simpler.  We did pencil in the lines so that the children would know where to paint, and then assigned each child a color to paint.  Sometimes we just write the color word right in there so that they know exactly where to paint!  The other animals were harder to cut out, but simpler to paint because they were all one color, such as the crocodile below. 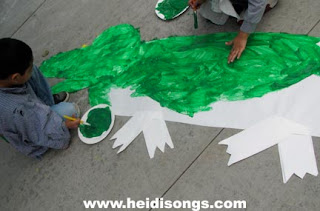 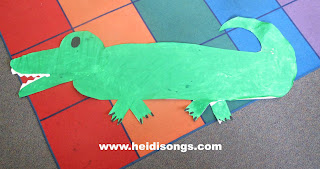 A great book to read with this is Actual Size.  It is also a great time for the children to measure the animals and discuss if we really managed to make the animals close to their actual size.  (Hint:  Most of them were still too small!)

Here’s some management tips for you, if you decide to do this project.
1.  Have an extra volunteer or two on hand to help.
2.  Tape down the animals outside on the concrete so that you can let the children paint them freely, and then they can go right off the edge without worry.  It leaves an interesting painted mark on the concrete that tends to look a bit like a zoo animal crime scene, LOL! 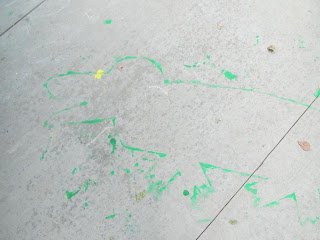 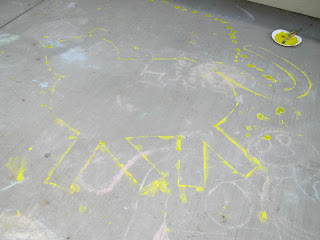