Sing and Spell the Sight Words: Where Did Heidi’s Word Lists Come From?

Have you ever wondered how I came up with the sight word lists on my Sing and Spell the Sight Words CD’s and DVD’s?  I recently received this question via a comment on my blog, and I thought that the answer might make an interesting blog post.  I always think that if one person asks a question, there may be many more that have that same question!  So here is the answer.

Hi Heidi!
I’m in the process of re-vamping our Kindergarten word list. Since we purchased your Sing and Spell Volume #1 and Sing and Spell Volume #2 CD’s and DVD’s last year, I was going to use them as a pacing guideline. (For example: first teach the words on #1 and then #2…etc.) However, I noticed that some of the words on our original list are not on these cd’s (dvd’s) and/or some of the words on your cd’s/dvd’s are not on your kindergarten Pacing Guide. After some research, it appears that your cd’s (dvd’s)are based on Open Court Imagine It Reading Program. Is this correct? My district uses the Dolch Word list. Any suggestions for how I should pace it? Your feedback is much appreciated!
Deb

Hi!
All of the words on my Kindergarten Pacing Guide are on at least one of my Sing and Spell CD/DVD’s.  But remember, I have five volumes of them, not just two!  As my district changed their required sight word list, I increased my collection of spelling songs to match it.

As far as your guess as to which reading program my CD’s and DVD’s are based on- well, if they match Open Court Imagine It, that is pure luck, LOL!  I have never even seen that one!   BUT… I did use a very old Open Court (California version) list for Sing and Spell Volume 2 when I was creating that CD.  More info on that below.  Maybe that’s why they seem to match up pretty well.

Here is how the lists for each sight word CD/DVD came to be: 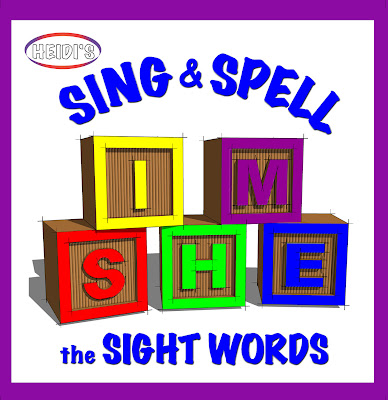 These are the words that were on the very old Houghton-Mifflin (California version) Kindergarten list (around 2005), plus a few that my district required at the time.  I think one of the reasons for my early success was that so many people needed the exact same words that I did, because HM was one of only two state adopted language arts programs in CA at the time. 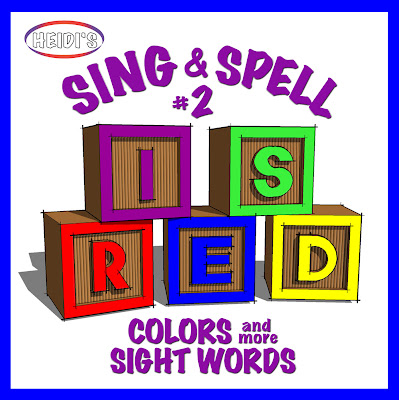 These words came from the Open Court reading program as it was published in CA in 2005.  This is because I was presenting mainly in CA at that time, and teachers in CA were asking me for the words from this list.  Also, there was a demand for the color words as well.  I know that I sure needed those songs, that’s for sure! 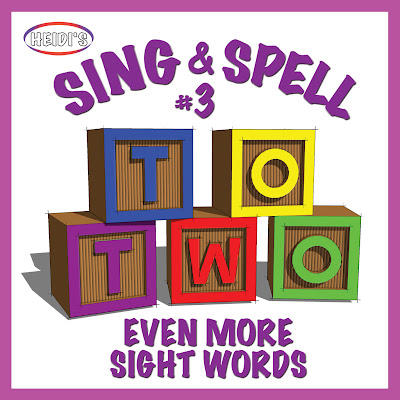 These were the words that I still needed to teach in my classroom because they appeared in a lot of basic “easy readers.”  There were about 12 words that I really wanted to record songs for at the time, such as “look,” “come,” “help,” “want,” and “one.”  To round out the list, I went to the first grade teachers at my school, who asked me for songs for those hard words like there, their, and they’re, etc. 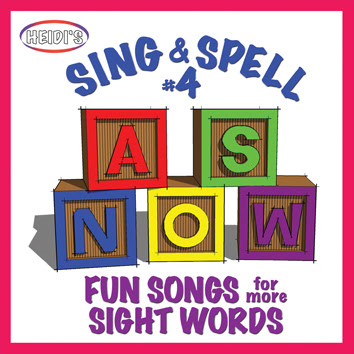 People started asking for Dolch words, so I went through the Dolch list and picked out all of the missing words from numbers 25-50, except the word “but,” which I figured would ONLY get me into trouble!  Naturally, later teachers started asking me why I skipped it and so I included it on volume five anyway!
Some people ask me why I didn’t include songs for the words “I” and “a” until Sing and Spell Volume Four.  Here’s why:  I NEVER would have imagined that a child would need spelling song for a one letter word- but people were asking me for them, so I wrote them!  And there you have it! 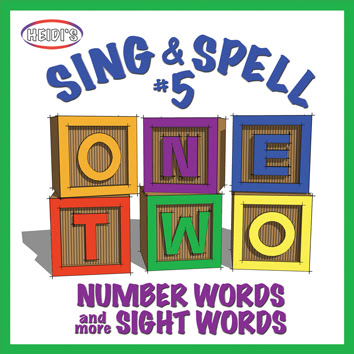 I definitely wanted songs for the number words, so those were first on the list!  Then my district got  a new intervention reading program called “SIPPS,” and it had an entirely new list of words on it that I had to teach.  I wrote songs for those words, plus I added the missing words from the Dolch list from numbers 50-75 (or so,) accidentally excluding the word “went.”  (I somehow managed to miss that word- so sorry!)  I actually received an email from a teacher that said one little boy was in TEARS when he found out that there wasn’t a song for the word “went!”  Oh my goodness, I felt so bad!

We are now working on a new Sing and Spell Volume 6, that will have more Dolch Words on it, plus some other words that are on other popular reading programs.  We are hoping it will be done around October! *UPDATE* Volume 6 is done! This is the expected word list:

Some of you may know that we have been working on making DVD’s with the sight words from the major publisher’s kindergarten word lists in order on them! Yes, we are still working on them!  And no, they are not quite finished.  We are hoping that they will be done by August.  It’s just that first I had to write the songs (done!) and record the songs (done!).  Then I had to video tape the movements (done for the six words we were missing!)
When they are done, I will post it right here!!  I will also post it on Facebook, Google+, and Twitter!  Sign up to follow me on Bloglovin or on any of those social networks, or by email feed (see the box at the top of the page), and you won’t miss it!

What do I mean by a DVD with “sight words from the major publisher’s word lists?”  That would be a DVD with just the Kindergarten sight words from “Wonders,” which is published by McMillan-McGraw Hill, in the order that they are introduced in that reading series, rather than in alphabetical order!  Get it?

Here are the reading series that we are now working on, and the word lists that I have.  Please!  If you have a different word list (or believe that the words should be in a different order,) let me know in the comments below ASAP.  Remember, we are trying to match what is in the publishers’ teachers’ manuals, not match what each district recommends individually.

Keep in mind that we may have to break up some of these lists into two different DVD’s that we probably will sell together as a set.  We will only do that if all of it will not fit on one DVD; we won’t do it to make extra money, “rip you off,” or be mean!  (Trust me- I know how hard it is to have to change from one DVD to another in the classroom!)  My hubby says that only about 39 or 40 songs will generally “fit” on one DVD.  Once it’s full, it’s full, and that’s the end of that!  So if we can’t make them fit, we’ll split them in two, and I’ll try to figure out where the “units” within the reading series start and stop so that the DVD’s are logically put together and easy to use.

Once we get these DVD’s formatted, there will be no going back!  It’s a major amount of work to create them, so we will not be able to make changes to the list once it is done.  I originally got these lists by asking for help from Facebook friends, because I don’t have access to all of these different reading series books myself.  I have tried to find the information myself “first hand” online, and even emailed a few of the companies, but so far I have not had any luck getting responses.

As far as the first grade lists are concerned, I’m not ready to tackle those yet.  The lists are generally WAY too long, anyway, (I know that my district requires 300 words in first grade!) so I will have to give some thought to the best way to go about that.  I can’t imagine successfully teaching a class three hundred songs anyway; we would have to just concentrate on the hardest words and leave out the easiest ones, I think.

We may also add the “Read Well” program, but we are starting with these major publishers first to see how they sell.

walk, may, stop, fly, round, once, open, live, and thank.  (These are the last few words on the first grade list that were not already recorded, or were not on one of the major publisher’s lists.)

Here is a list of ALL the Sight Words in alphabetical order and which Volume you can find them on!

If you have any more questions, please let me know!
And if you see that there is a mistake on any list, let me know ASAP!
Heidi