This week, we are back to normal in the classroom, and getting ready for the Thanksgiving Holidays. I personally am very thankful that all of my testing is completely done, and most of my report cards are  FINISHED – at least the ones that I need for conferences this week anyway!   I will be conferencing after school each day with all of the parents in my classroom either this week or next. Last weekend, one of my good friends, Vanessa Levin of Pre-K Pages.com, was emailing me to see if I had any new ideas for Thanksgiving themed literacy activities.  So we started kicking some ideas around, and together we brainstormed up a couple of fun ideas!  Naturally, since she teaches Pre-K, her activities have more of a Pre-K slant, while mine have more of a Kindergarten twist to them, of course!  The great thing about being able to draw my own artwork on the computer is that I can modify it as needed and even give it away as much as I like!  So I hope you will enjoy gobbling up these turkey activities as your free downloads this week!

I adapted this activity from one given to me by my mother when she retired from teaching many years ago.  I was given the gift of her file cabinet, and this idea was one of the things in it!  I have given it my own fresh artwork and changed the chant a little bit, though.  I have no idea what the original source of her file was!  I included turkeys with sight words, upper case letters, and also some blank ones so that you can modify the activities as needed.

To prepare:
Download and print out the turkeys with the letters or words on their bodies.  I like to glue my turkeys onto small paper plates, because that way they can be used for the activity below as well.  Spread the plates out on the table for small group play, or on the floor for whole group play.  (If you play in a whole group, it works best to have the children all sit in a circle.)

*  Then, the teacher chooses a child to guess what word or letter the object is hidden under.  The child cannot lift the turkey up until he or she attempts to identify the letter or read the word that he want to look under.  The children continue guessing until someone finds the hidden object.  In my class, we always continue playing until everyone has had a chance to look under a turkey.

Modifications:
Vanessa told me that she turned this game into an ActiveBoard activity.  I don’t have one of those, so I wouldn’t know how to do that, but I would bet that it turned out great!  She also made her turkeys into a Bang game. 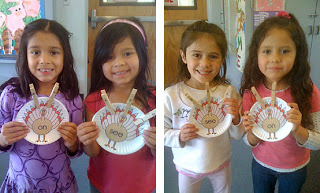 2.  Turkey Tails Sight Word Spelling (or Alphabet Matching)
In this activity, you use the very same turkeys on paper plates as above.  However, for the sight words spelling activity, you just get clothes pins and write the letters on each one (which was Vanessa’s great idea!).  Then have the children clip the letters to spell each sight word onto the plate to form an even larger tail!  If you are working on alphabet recognition, then have your children look for the lower case letters to match the upper case letters on the turkey bodies.  Vanessa suggested that if they are looking for four clothespins with the letter T on them, for example, then she would make four dots on the plate as a cue to the child to look for four.  This would be especially important if the numbers of clothespins with each letter on them varies.
Modifications:
You could write numbers on the blank turkeys and have the chidren clip the right number of clothespins on the turkey’s tail to match the number. 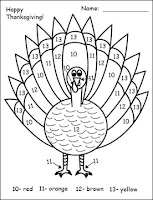 3.  Turkey Color Words Worksheet
Need I say more?  What would the holiday BE without the quintessential holiday color word worksheet?????  The only thing is that this one turned out to be more of a “color by number” worksheet, because the color words would not fit inside the turkey feathers unless they were turned completely sideways or were very small.   So I decided to put numbers in the turkey sections instead of the color words.  And because my kids are working on the numbers from 11-20 right now, I decided to use those numbers rather than 0-10.  I hope that it is useful to you!

4.  Dinner’s Ready!
We started working on this Singable Book from the Little Songs for Language Arts CD this week! It’s simplicity it very appealing to the children, and they especially LOVE the “secret pocket” at the end of the book with the dinner plate that can be pulled out of it!  When I pulled it out for the first time, one of my students, shouted, “Out-STANDING!!!!”  I thought that was so cute!  Some of the others said, “How did you DO that????”  So I showed them how the last page of the book was actually a full size piece of construction paper folded in half and then stapled into the binding to form a pocket as well as the last page of the book. 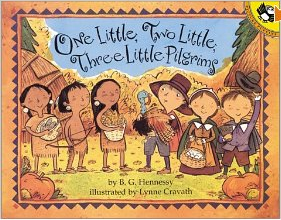 5.  Great books for Thanksgiving
1.  Thanksgiving is For Giving Thanks by Margaret Sutherland
This is a cute book that tells lots of examples of things that children might be thankful for, ending with being thankful for a family gathering on Thanksgiving.

2.  Thanksgiving by Miriam Nerlove
This is a very simple retelling of the first Thanksgiving.

3.  Thanksgiving Day by Gail Gibbons
This book tells the story of the first Thanksgiving and how it relates to our current traditions.  It’s a good explanation of why we celebrate as we do.

4.  One Little, Two Little, Three Little Pilgrims by B.G. Hennessy
This is a cute little counting book that you can sing while you read!