Happy Memorial Day Weekend!
Use code SUMMER for 15% off your order!
Plus FREE DOMESTIC SHIPPING on orders over $25.00! Does your class study the farm?  Mine does!  Here are the best ideas from my Farm Unit for Pre-K, Kindergarten, and First Grade.  There are some freebies in there, too!  Enjoy!

Below are the books we read during farm week.  I always try to include one non-fiction and one fiction book about each animal that we study.

We always make our HeidiSongs “Singable Book” on the farm, too!  This one is called, “My School Farm.”  We generally do one animal per day, but the cow and the pig take a little more time than our group rotation allows for.  So we usually do just the head on one day, and the body on another.  Sometimes, we will do the head at one table and the body at another table, but do them both on the same day.  But when we do the bodies, they don’t take much time, so we have to have something else for the children to do when they are finished.

Here is what the song sounds like.  We also have movements for it, of course!  Those are on the Little Songs for Language Arts DVD.  But guess what?  You get the mp3 song file when you purchase the masters for the book!

These art projects make FABULOUS bulletin boards, too!  We always put them on our bulletin boards before gluing them into the farm books for the children.  The captions on the walls are the lyrics of the book (and song!)

Here is a little printable foldable easy reader that I made up for farm week.  I am really enjoying making up these little books!  This one concentrates on the sight word “like.”  First I have them try to read it and point to each word individually (track the words) while doing so.  (Sometimes it is easier to copy the words onto sentence strips and put them onto a pocket chart to show them how to do this.)  After the children read it, they are supposed to look for and color (or highlight) the word “like” whenever they see it in the book.  Then I have them count the number of words and sentences on each page (or several pages, anyway!)  We also count the number of letters on one of the pages, just to make sure that we know the difference.  We find the title of the book, and perhaps circle it.  When they children are done reading it, they can color it.

Here is a little color by number page that I made that integrates math (number recognition) and language arts (color words) at the same time.

Here is another activity that I like to do on farm week to practice listening for and identifying beginning sounds.  Just say the name of the farm animal (or show pictures, or manipulatives, etc.) and then have the children try to give the beginning sound that they hear.  If the children are ready, they can write the letter on a paper, dry erase board or in box of sand, etc.

And another language arts activity:

Write a sentence about the farm!  We usually do our farm unit very near the beginning of the year, about the second month of school, so this is usually the children’s first experience with sentence writing.  I will have them write something like, “I see ____,” and fill in the last blank with a color word.  Then they would draw a picture of a farm animal of that color.  I prefer to have them write color words rather than the name of the animal because we have usually sung those color word songs so many times that it is usually quite do-able for them!  But you could always have them just try to write “I see a ____,” and have them write as many sounds in the last space as they can hear in the name of the animal that they choose.  Some children will simply write, “I see a h.” (The “h” stands for horse.) And that would be really pretty good at this stage!  OR, you could have them find a farm animal word on your word wall with a picture next to it.

Some kindergartners are already ready to do some guided drawing of farm animals at this point in the year as well!  You can download it here.

1.  We graph our favorite farm animal and write about the farm after it comes. I laminate the top of the graph to keep from having to remake the graph every year. Then when I am ready to do the graph, I just tape a piece of construction paper to the back of it, with the paper hanging down from the graph header.  Then the children use a sticker name that I print on address labels to place their name under their favorite animal. I would be happy to give you this graph, but as you can see, it was made with clip art that I did not draw!  So I can’t do it this time. Sorry!

Even though you cannot download the graph above, I’ve included two student worksheet graphs for downloading this week, one for the Farm Animals, and a fall themed one for the month of November!

In this activity, the children count out a given number of plastic farm animals (or whatever you want) and put them in the pumpkin patch.  They then raise their hand and tell the teacher, aide, or volunteer that they are ready, and how many farm animals they counted.  If the adult agrees that it is correct, then the child may color in that numbered pumpkin on his or her pumpkin patch.  There are three different versions so that the children can progress from smaller to larger numbers.  The first one goes from one to ten, the second from eleven to twenty, and the last goes from twenty-one to thirty.  When the children get to the pages with the numbers past ten, we give them Cuisenaire “Count-Ten Cartons,” which are just like egg cartons that have been cut down to have just ten spaces.  (Ice cube trays with just ten spaces work great too, if you can find them!  Sometimes they have them in the dollar store.)  This helps them count the larger numbers more easily.  For example, for number twelve, they put one animal in each space, and then put two extra farm animals in the pumpkin patch.  Then once the adult checks that they really do have twelve animals, and have identified which pumpkin on their worksheet has a number twelve, they may color in that pumpkin. 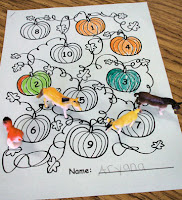 I  made a spider web page that is exactly the same thing, but with spiders!  I bought a box of plastic spiders at a party store, and saved them so that the kids could count them for Halloween fun.   Just for fun,  I purchased some plastic spider rings, and I thought that for Halloween, we will put one ring on each finger and count them to ten.  Then we’ll add a few more plastic spiders in the dish, and count them up to twelve or thirteen, etc.  Anyway, the good news is that these two counting sheets (Pumpkin Numbers and Spider Numbers, all three versions of each one) have been included as your free download this week.  I hope that they are useful to you.  Enjoy!

This is a small group game that is along the same lines as Halloween Boo!, but with a farm animal theme.  It also ties in well with Thanksgiving, since it includes a turkey that is trying to escape becoming the farmer’s dinner!  You could make your own Barnyard Bang game with your own clipart, or purchase mine as a download from my site.

1. Duplicate three sets of the picture cards, and five sets of the question cards.  Cut apart and mix up.  Put one Barnyard Bang card on the bottom of the deck.  There are blank cards at the end if you need to change the word cards.  There is an alternate set of picture cards near the end of this set if you don’t want to use the duck to practice the “duck and cover” position that is often taught to children in earthquake or emergency drills.  The alternate set just has a duck on that card.  Copy the set that meets your needs best. The question cards included cover sight words, alphabet, numbers 0-30, sorting, and ordinal numbers.  I usually choose either the math or the language arts cards.  There would be way too many question cards if you use them all, in my opinion.

3. If the child gets a “special” picture card, he does the following:
*  “Duck and Cover” (Or just the duck):  the child says, “Quack, quack, duck and cover!” and curls up into the duck and cover position on the floor, as is illustrated on the card.  The hands should be covering the neck.  If you are using the duck only card, have your kids quack like a duck or do the action of your choice.
*  Milk the cow and get a treat:  the child pretends to milk a cow, and then wins a treat.  You may wish to blow up a rubber glove with air, close it with a rubber band,  and let the children pretend to milk the cow that way!
*  Giddy-up:  All of the children move down one seat clockwise, leaving their cards behind.
*  Duck, duck, goose:  The child points to three other children in succession, saying, “Duck, duck, goose!”  The child that he is pointing to on the word, “goose,” must change places with that child, leaving his or her cards behind.
*  Barnyard Bang:  The child says, “Bang!” and gets all of the cards at the table, except for the dealer’s cards.
*  Dinner Time:  Run for it!  The child says, “Gobble, gobble!” and runs around the table like a Thanksgiving turkey running for his life!  The child next to him that just had a turn becomes the farmer and grabs a fork, and chases him around the table.  (Remind children that they may not tackle and actually capture the turkey!  This rarely happens, anyway, since the child that just finished his turn is usually not paying close attention to the next child’s turn.  By the time he realizes it’s his turn to be the farmer and finds the fork, the turkey has already gotten too far away!

And last of all, we have a local “party pony and petting zoo” visit our school!  It is so much fun!

The Gingerbread Man: An Easy Class Play for Kindergarten! Posted on 6 Dec 15:06