Helping Kids Learn How to PAY ATTENTION- and Other Important Social Skills!

There are many things that keep children from paying attention, and sometimes the distractions come from within the child himself!  So in order to help children learn to identify their own behaviors that make learning harder, and hopefully help them learn to avoid them or stop doing them altogether, I have written a brand new book called Wiggles Learns to Pay Attention!  This book is a sequel to my first Wiggles book, called Wiggles Learns the Rules at School.

We read one of these Wiggles books nearly every day as a way of teaching and reviewing the procedures and rules.

I introduced this book to my class a few weeks ago, and the children LOVED it!  I love it because it helps me address all of those little bad habits that kids sometimes have that prevent them from paying attention to lessons, such as:  picking at yourself or your clothing, spinning around in circles on the carpet, rolling around on the carpet, wandering around during a lesson, attention getting behaviors, asking or telling unrelated questions or stories, talking to other students in the middle of a lesson, interrupting, and asking to take care of restroom needs in the middle of a lesson.

In short, all of the little things that the children did continually during the first two or three weeks of school when they were supposed to be paying attention (but weren’t!) found their way into this book!  Teaching school turned out to be a really fun and inspirational way to brainstorm the idea for a new book!  Take a look at the video below to see how it turned out.

I find this book to be a wonderful, non-threatening way to address behavior issues with children because it takes the focus off of individual children that may be misbehaving and focuses it on the dog in the story instead.  When I tell the story, I always use a soft hand puppet and have that puppet act out the story, and as he fidgets and gets distracted, I talk to him about why his behavior is prevents him from learning, and what he should do instead.

This photo shows an old “home-bound” preview copy of our book “Wiggles Learns to Pay Attention” in black and white. It is now in color.

Books that teach children skills like this are often referred to as “Social Stories.”  In social stories, there is usually a child that learns to deal with a social situation in a positive way.  In this case, we are using a cute little dog that children can relate to instead of a child, and teaching children about behaviors that will help them be more successful in school.

Once children understand why these behaviors are important and beneficial, it is more likely that they will be willing to cooperate with adults that remind them to, for example, look at the reader in the eye when he is speaking, or to sit in one place rather than spin around in circles while listening to a story.

One great thing about using a puppet to help teach social skills is that when a child is having behavior issues, you can always talk to the puppet about the misbehavior rather than the child if necessary, especially in cases in which the child simply will not listen.  For example, one little boy had a hard time at recess.  Apparently, he had been seen throwing rocks by more than one adult and several children, and had to come in for a chat- but each time I began the conversation he kept yelling denials about throwing rocks.

So I decided to let him calm down for a few moments and then talk to the puppet instead after the children came back inside after recess.  My thought was that if I did it this way, the entire class could benefit from this teachable moment, and I could avoid lavishing any negative attention on the child, which could actually backfire and reinforce the very behavior I was trying to eliminate.

It worked!  In fact, as I tried to talk to Wiggles about the bad behavior, the child in question kept trying to interrupt my conversation with the puppet and insist that he did not do this or that.  I just reminded the child that I was not talking to him, but the dog puppet instead!  Thankfully, the child in question gave up after two or three tries to redirect attention to himself, and simply listened to my conversation with the Wiggles puppet instead of argue with me and try to get the class to focus their attention back on him.  In the end, he gave up on the behavior I wanted to eliminate, so it must have worked!

The other good thing was that I never had to actually sit down and confront the child on his obvious lie, (which sometimes leads to difficult confrontations with parents who want to support their children that insist they are telling the truth.)  He still heard all of the reasons why he should not be throwing rocks (when I talked to the puppet.)  He still heard the entire conversation about the issues with the class, and he sat out during that time, but we didn’t have to pursue it any further than that.  (Thankfully, he didn’t hit anyone with the rocks!)

On a side note, last week one day after school during my tutoring group, the classroom door opened, and in trotted a small dog that someone had evidently let in.  Wouldn’t you know that the dog was a dead ringer for Wiggles, LOL!  (Well okay- he was a white mutt with black spots, which was close enough for us!)

The kids in the group all started yelling, “WIGGLES, WIGGLES!!!!!” as if a real live celebrity had just walked into our room!  It was hilarious!  It turned out that the dog had been sniffing at our door after school and one of the children from another class that had gone to the restroom had seen him there, and decided to let him in, assuming that he belonged to us!  Not long after that, the dog’s owner came looking for him.  Luckily, he was a friendly little hound!  You can see a picture of our furry little visitor at the right. 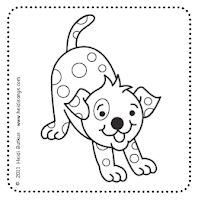 Where’s Wiggles?  Here he is!

Here’s a new sight word game, with a Wiggles the Dog theme!  My kids absolutely LOVE this new little game, because they get to pretend to be dogs and do dog tricks!  I love it because I get to watch them do silly things like shake, sit, stay, roll over, speak, beg, and wag their “tails,”LOL!  So in the game, the children read a word and then pick up the card to see if Wiggles is hidden behind it.  If not, the whole group does the dog trick.  It’s as simple as that.  It can be played whole group or small group. My only complaint about it is that I only wish we had more time to play it!

In a small group, it works better if you seat them on the floor rather than around a table, since they constantly need to get up from the table to do their dog tricks, and that’s a bit of a pain.  So it is better to just push the table and chairs out of the way, I think.  As always, we included a page of blank word cards so that you could change the words to whatever you are working on, or even change them to numbers, etc.

When I tried the game out for the first time a couple of weeks ago, I had an incredibly fun morning, giggling the whole time as I watched them do their doggy tricks!  But I think that this game is a good cure for the blues.  Who could ever be sad while watching bunch of little kids roll over and beg, or wag their tails?

We also sell the CUTE Wiggles puppet for only $10!!