Today I am going to tell you about a resource that I have really fallen in love with… our newest creation, called Counting Creatures Subtraction Worksheets!  And one really fun part of this book is the part of it that is a lot like my recent post on Loose Tooth Subtraction, except this one has the loose teeth on MONSTERS!

We have been working on developing this new subtraction book over the last couple of months, and I have been trying it out in my classroom, of course.  The children really love the monster theme of these worksheets, and they love coloring in those monsters when they are done with their work!  But the BEST thing about them is that my kids passed their official subtraction test for the report card this week with flying colors, and I would have to say that these are the best results on a subtraction test that I have had in years!  I think it is because they are so excited about the activity, and got so much good practice doing it. 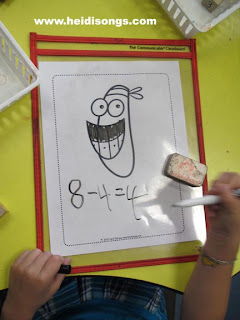 Roll a die to figure out how many teeth to black out.

This is how the Monster Teeth Subtraction activity works.  There are six different monsters, with a different number of teeth in each mouth.  You roll a die or spin a spinner to see how many teeth you will black out, and then write an equation to match the picture.  For example, in the picture above, the monster had eight teeth.  The child rolled a die that came up with a number four, so he colored in four teeth.  Then he wrote the equation, “8 – 4 = 4.” 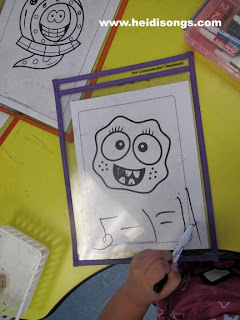 For my class, we had been doing subtraction for a while, and I decided that the children were up for a little bit more of a challenge than just having all of the children do the very same monster and equation at the same time.  SO…. I decided to try it this way:  I gave each child in the group a different monster, (with a different number of teeth in each one.)  Then someone in the group spun a spinner, and everybody in the group wrote a different equation based on that number.  So if we rolled a two, then a child with a monster that had seven teeth would write “7 – 2 = 5.”  But the child next to him had a different number of teeth in his or her monster, so his first number would be different!  If he had a monster with ten teeth, then his equation would be “10 – 2 = 8.”  The only number in common was the minuend (the second number in the equation.) 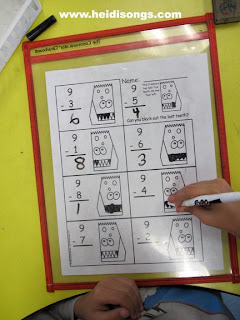 As a follow up, each child did the corresponding worksheet on the back.

The reason why I like this as a small group activity is that it is impossible for the children to copy each other’s equations!  They HAD to think for themselves and write their own equations.  It really was a wonderful activity!  As a follow up, the children then flipped their dry erase sleeves over and did the worksheet that corresponded to their own monster.  Later on, I gave the children an opportunity to do the worksheets again with crayons, with plenty of time to color them as they liked, since this was such a favorite activity. 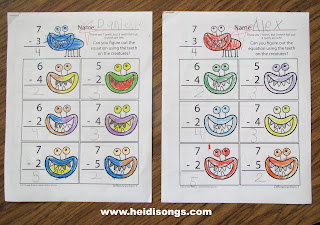 Here are some examples of the children’s work done with crayons.

There is another great thing that I really like about the subtraction book in general.  Each page is marked with a guide that says, “Differences from 7” or “Differences from 10,” etc.  That tells me exactly what types of equations I will find on each page.  I discovered this week that I could give them a whole variety of monster worksheets to pick from, and still have them essentially be doing the very same worksheet! 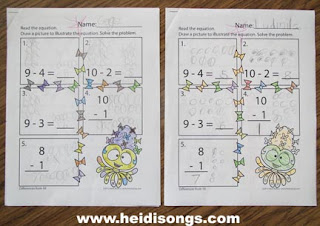 Here’s what happened:  Since we were at the end of our subtraction unit, I knew that I had more worksheets than I would ever truly need.  So I decided that I would go through the workbook pages on my computer and just print a variety of worksheets- just maybe three or four of each one, but stick with differences from nine, for example.  That way, everyone would be getting the same equations, but would still feel like they had some control over what they were going to work on, and what they might like to color if they finish it in a timely manner.  I just made sure that I printed enough for the whole class, plus a couple of extras. 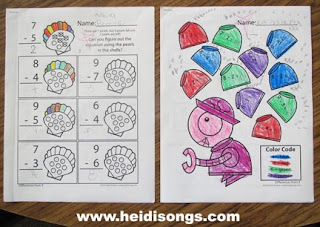 When I was printing them out, I had the feeling that it was going to be a little bit “risky.”  What if one child wanted one that ran out?  Would he or she have a little “fit?”  I was pleased to find that none of that happened!  The children were exceedingly happy with the idea of actually getting to CHOSE what they were going to do in math, because that NEVER happens, LOL!  WOW.  I can’t believe that I had never thought of that before!  (Duh!)  I really should have done that with the Counting Creature Addition Worksheets, too, since they are set up exactly the same way!  (Double Duh!)  I don’t know why I never thought of that before.  It’s the perfect solution for children that need to feel that they have ownership in their day, and who like to believe that they are in control- but they’re not!

By the way, if you missed my blog post on the Counting Creature Addition Worksheets, along with the free sample for that package, click here. 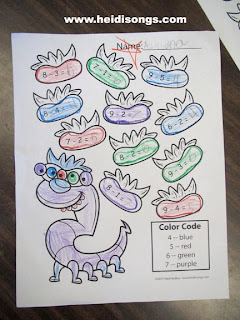 The other thing that I think really helps about these worksheets is that there are usually only about six equations per page, and there are never more than ten!  That means that the average child can easily finish their work on these pages in a reasonable amount of time without becoming overwhelmed.  If you would like to try a few of these subtraction worksheets FREE, then click here.  If you want to purchase a just some of them or all of them, click here.  They are sold in downloadable packets of about 15 worksheets each for $3.00, (except the last packet has 27 pages and it is $5.00).  Or, you can get all 85 pages as a download for $12.00.

Want some music to go with this?  The Addition and Subtraction Songs on the Musical Math CD and DVD are really fun ones that my kids love!  Check it out here.

Follow me!   Did you enjoy this post? Do me a favor and share it with your friends!  And follow this blog by signing up email updates, or follow on Bloglovin’, or follow me on TPT!
I’m also on Pinterest, Facebook, Twitter, Google+ and YouTube, too!  Don’t forget to sign up for our email newsletter (on the left sidebar) for special deals and promo codes that you won’t find out about anywhere else.
basic math coloring Counting Creatures learning centers loose tooth subtraction math math centers math workbook math worksheets monster teeth Musical Math subtraction teach & sing teach and sing Uncategorized workbook worksheets
Share