Recently, I was asked whether or not I have a word wall in my classroom, and how I use it. Yes, I do have a word wall in my classroom! I try to keep it uncluttered with not too many words, and all within view of my writing table as much as possible. I add the words to the wall as the children learn them and need them for their writing. So at the beginning of the year, there is no word wall at all in my kindergarten classroom. Then, I begin adding in each word as we learn the word and its spelling song. I also add in “seasonal” words as the need arises. For example, when we are studying zoo animals I put up pictures of zoo animals with the words next to each picture. I put up holiday words during the holidays as well. I take these words down when we are done with our unit of study due to lack of space on the wall. As our word wall gets fuller and we start to run out of space, I usually put these seasonal words on a pocket chart rather than up on the word wall with our regular sight words. This year, I also added a separate section for the children’s names with their pictures, since some of them had a hard time finding their friends’ names on the pocket chart when the words were mixed in with the regular sight words – even with a photo of each child next to their name. 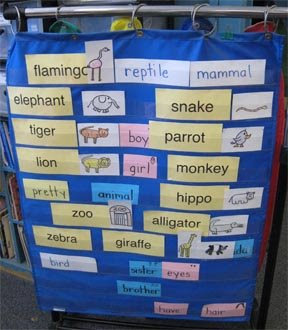 I use it for children that can sing the song but not visualize the letters as they are singing. I demonstrate a sample sentence for my kids before I send them to write when we do guided writing. (See my blog entry on using sentence structures in the classroom.) I tell the kids what we are going to write, and then ask for a volunteer to find the word on the word wall for me as the rest of the class sings the spelling song. That child finds it and points to it, and then we all say the spelling aloud and watch as that child points to each letter. I write that word down on my big white board easel while the kids watch. Then we do the same thing with the next word in the sentence. I am also constantly going back and re-reading with the children what we have written so far. I like having the kids sing while I demonstrate the sentence of the day, because it helps keep them focused. Most of them are usually doing the motions as much as they can while they are seated on the floor watching me.
My neediest little ones seem to really benefit from watching me model exactly how to find the word that I need to write. For some of them, I later have to prompt them to physically get up from the writing table and touch the word on the wall; then they go back to their seat and write it. A few of them have to do that for every word in their sentence. It’s just my very lowest ones that need it, though. Many of these children have not had the benefit of preschool, and are usually speaking English as their second language. Sometimes, their skills in their native languages are poor as well. But for children who are learning English as their second language, I find that modeling my instructions as I verbalize them is always the better way of teaching. And it’s really good for the other children, as well! I do find, though, that later it becomes necessary to push the children to write some words that are NOT on the word wall. This forces them to get used to using inventive spelling when necessary. So as the school year ends and we get closer to our Open House date, I usually remove the word wall for the last four weeks of Kindergarten.