Well, it is not spring quite yet, but we certainly have spring fever in my classroom!  We have taken down the snowy white bulletin boards and replaced them with some flowery boards with insects on them.  It’s wonderful to have some color back in the room!  We are now beginning to study the life cycles of animals that hatch from eggs.  Thanks to a wonderful volunteer dad, we planted some carrots and sweet peas this week, too, and that was exciting for the children.  Since it takes less than a minute for each child to actually put the seeds in the ground and cover them up, I had him let the children ride the tricycles or draw outside with chalk on the pavement after they were finished planting.  Usually, we have good luck with these plants and they grow nicely in our classroom garden, giving us a nice little harvest in late May. I will, of course, be ordering insect larva from InsectLore.com soon, but I want the insects to be alive during our Open House in the month of May, so I am going to try to time it just right to make that happen.  Last year, they all died just in time for the big day!  We also have an incubator and a nice lady in town that gives us chicken eggs, so we’ll soon be having an adventure in hatching chicken eggs, too!

Spring Bulletin Boards
I love putting up spring bulletin boards!  It is so refreshing to take down the stark white snowy backgrounds we have been staring at since the beginning of December and replace them with some nice, bright colors.  The flowery background that I use for all of my bulletin boards (except the winter ones, of course) are made by dipping some toy cars into green paint and then rolling them on the paper!  If you do that a bunch of times, you’ll have some wispy, grassy stems, especially if you can find some toy cars with some interesting tread patterns and different sizes of tires.  Then, we added flowers painted with Q-tips and small paint brushes.

I saw this idea at an art display at a Kindergarten conference many years ago, and tried it in my classroom the following year.  The children loved it!  It was a lot of fun, but we did not wind up with enough paper painted to cover my large bulletin boards.  So about ten or eleven years ago, I decided to take home the supplies needed to paint a LOT of butcher paper myself, laminate it, and then use it yearly as a background for most of my boards.  My three daughters were about in the fourth or fifth grade, so they helped me paint.  We even had a painting party and let them invite some friends over to help paint lots of grass and flowers!  It was great fun. 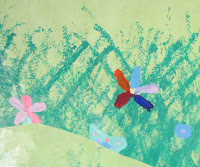 Then I cut the paper to exactly the right size that I would need for each bulletin board, and then labeled the back of each piece so that I would always remember which piece fit where.  This has worked like a charm, and I used it each year!  The paper you see in the photos here is the butcher paper we painted together so many years ago.  Laminating it is the key to keeping it nice!  True, the kindergartners did not help me create it, but that is the only part of the boards that they don’t help with, and I do let them make the grassy flowers using the toy cards to paint with sometime during the year.

In addition to the grassy flowers, I  am including a free download of my patterns for the bee and the ladybug this week.  The directions for each are included.  I am thinking that maybe next year I will reduce the ladybug in size so that it matches the bee a little bit better, because it seems a little bit too large.  Also, since I now have TWENTY-SEVEN students (insert heavy sigh here…), we are running out of room to display everyone’s work, so smaller projects will fit better in the available space. 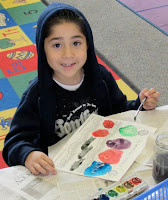 Back by popular demand, (or at least by request on my HeidiSongs Facebook page!) is another “Sight Word Surprise” water color resist project.  I managed to create this little insect themed paper while sitting on the airplane to the conference in Oklahoma!  I also made another one with shamrocks that I will be sharing with you next week.  To do this, all you have to do is get a very cheap white crayon, such as the Roseart brand, and write a sight word in the circled spaces as shown.  I run the copies on white cardstock, FYI.  Then let the children water color the paper as they wish to make the secret sight word appear.  When they are dry, you can drill the children on the words that they have painted.  I always write a variety of sight words in the spaces so that there are several to read. 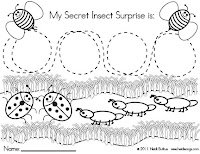 It was so much fun to be creative again, even if the only place I could squeak out a little time to do it was on a plane!  Of course, what I SHOULD  have been doing was the comments for my report cards, which turned out to be due YESTERDAY- surprise!  (Ahem… I guess I missed that rather important email…. I found out that I  had until midnight at lunchtime!  I thought I had another week until parent conferences begin on the seventh.)  So after a long day at work yesterday, I had to sit down and get all of my scores into the computer and write comments for 27 children, and get them all uploaded before midnight.  It took me five hours, and by hour number four, I  would have given just about anything to put the rest off 'til morning, but alas, that was not possible!  Can you hear me whining????  It’s really no one’s fault but my own. 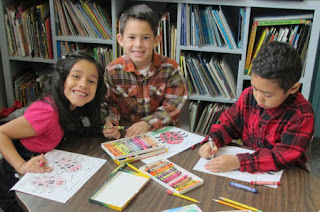 One really neat thing about having a HeidiSongs Facebook page is the feedback I  am getting regarding the projects that I am posting on my blog!  I really like it when people tell me what is working for them and what is not.  It also helps me to know what you would want more of!  That is precisely why I made more of the Shark Teeth Addition Worksheets that we posted for sale last week. And that is also exactly why I made another Color By Nonsense word worksheet to share with you today!  My class did this on Wednesday, and they really liked it.  Of course, the students in the lower functioning groups had a bit more trouble with it and needed more guidance, but that is true of anything. Unfortunately, Wednesday was our Spring Picture Day, and consequently we were so pushed for time that I didn’t get a chance to give a good introductory lesson for this worksheet, so when they got to the language arts table to complete it, a bunch of them were still a little unsure of what to do.  It didn’t help that getting their pictures taken always seems to make them hyper!  I suppose it is the change in routine that causes it.  This was a problem because I was attempting to finish up the last few little bits of testing that remained, and I knew that it just HAD to get done, and time was running out.  So I  left my group with a volunteer that was also attempting to give Accelerated Reader tests at the same time, and she had to stop and answer questions whenever she could.  It wasn’t perfect, but I still feel quite blessed to have such wonderful volunteers.  FYI, at my school, we are working towards getting all Kindergartners to take an  Accelerated Reader test every single week. 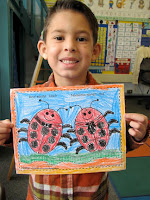 I have somehow managed to do this with only my students that I consider to be “really reading” and keep everyone else out of it, but I don’t know how much longer I will be able to get away with this!  It is incredibly time consuming because each child needs individual help in taking the tests. I think it is a fabulous program for those children that can really read, and that’s sixteen of my 27 students.  I just don’t want to bother giving children these tests when all they are doing is listening to stories read aloud; it just doesn’t seem worth the time and effort, but that’s just my humble opinion. 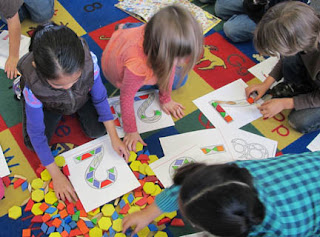 Do you remember those Alphabet Pattern Blocks that I have told you about in previous blogs?  Well, now we have NUMBER pattern blocks- and they go all the way from zero to thirty!   They are two options, both color and black and white.  I used them on Thursday to review the numbers twelve and twenty-one.  I made copies of the twelve and twenty-one pages in black and white, and then glued them down on a large sheet of construction paper. Then I had the children rebuild these numbers with paper pattern blocks and glue them down.  After that, they took rubber stamps and stamped the correct number of stamps above their number, circling groups of ten.  I was even lucky enough to borrow some insect stamps from the teacher next door, too!  If the children made too many stamps, then they had to cross those out.  Tomorrow I am going to drill the children on the numbers by holding up their finished projects.  Fun!

FYI, I think it works much better to have an adult place one little drop of glue on each pattern block space and then have the children just lay down the paper pattern blocks.  If they handle their own glue, it takes MUCH longer to complete this project!  They can certainly do it themselves, but just plan on giving them more time to get it done.  In this case, I would probably just do the gluing on day one, and then the stamping on day two.  It would also work fine if they laid down stickers rather than stamped pictures with a rubber stamp.

Hope you enjoy it!